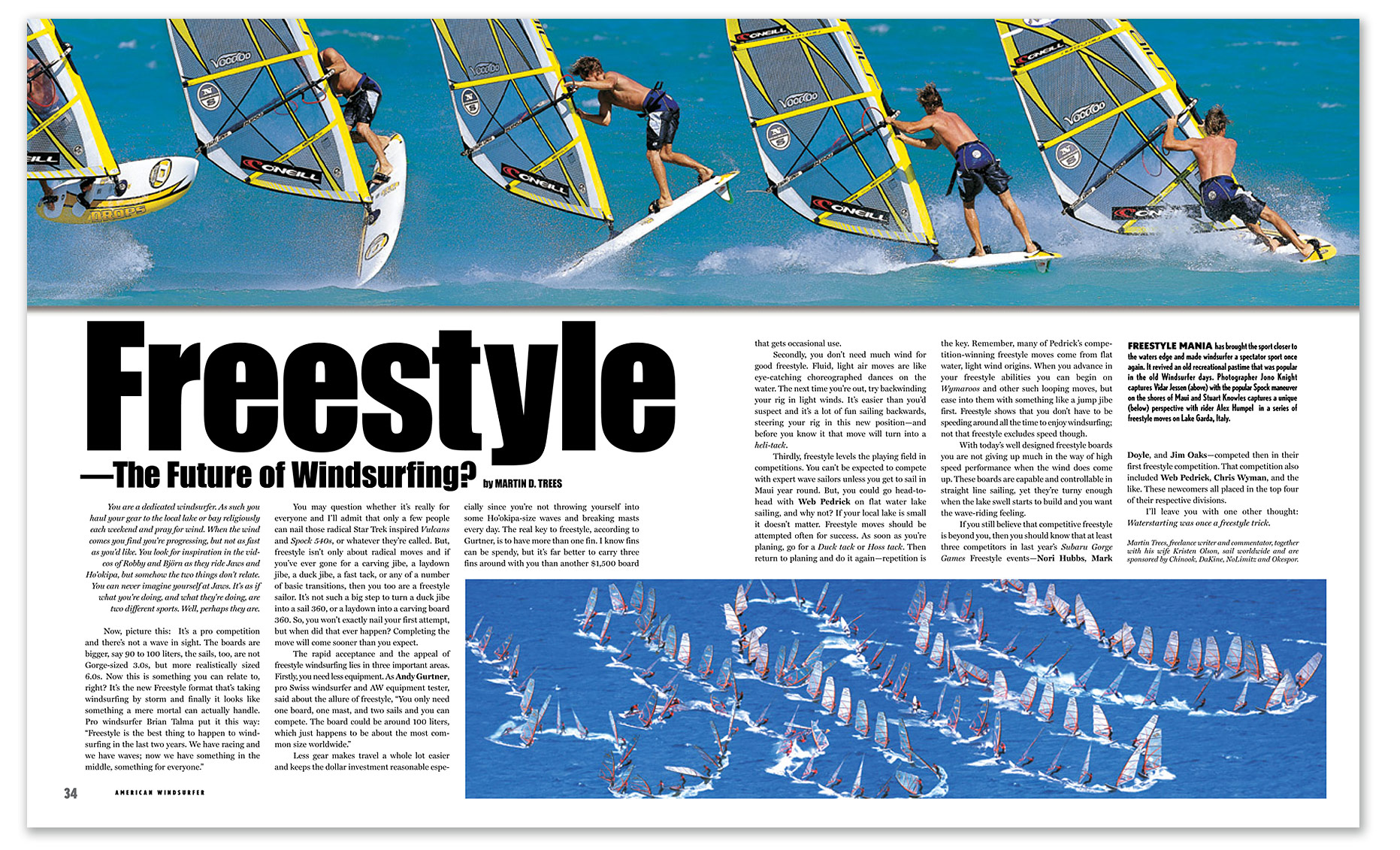 You may question whether it’s really for everyone…

FREESTYLE MANIA has brought the sport closer to the waters edge and made windsurfer a spectator sport once again. It revived an old recreational pastime that was popular in the old Windsurfer days. Photographer Jono Knight captures Vidar Jessen (above) with the popular Spock maneuver on the shores of Maui and Stuart Knowles captures a unique (below) perspective with rider Alex Humpel  in a series of freestyle moves on Lake Garda, Italy.

YOU ARE a dedicated windsurfer. As such you haul your gear to the local lake or bay religiously each weekend and pray for wind. When the wind comes you find you’re progressing, but not as fast as you’d like. You look for inspiration in the videos of Robby and Björn as they ride Jaws and Ho’okipa, but somehow the two things don’t relate. You can never imagine yourself at Jaws. It’s as if what you’re doing, and what they’re doing, are two different sports. Well, perhaps they are

Now, picture this:  It’s a pro competition and there’s not a wave in sight. The boards are bigger, say 90 to 100 liters, the sails, too, are not Gorge-sized 3.0s, but more realistically sized 6.0s. Now this is something you can relate to, right? It’s the new Freestyle format that’s taking windsurfing by storm and finally it looks like something a mere mortal can actually handle. Pro windsurfer Brian Talma put it this way:  “Freestyle is the best thing to happen to windsurfing in the last two years. We have racing and we have waves; now we have something in the middle, something for everyone.”

You may question whether it’s really for everyone and I’ll admit that only a few people can nail those radical Star Trek inspired Vulcans and Spock 540s, or whatever they’re called. But, freestyle isn’t only about radical moves and if you’ve ever gone for a carving jibe, a laydown jibe, a duck jibe, a fast tack, or any of a number of basic transitions, then you too are a freestyle sailor. It’s not such a big step to turn a duck jibe into a sail 360, or a laydown into a carving board 360. So, you won’t exactly nail your first attempt, but when did that ever happen? Completing the move will come sooner than you expect.

The rapid acceptance and the appeal of freestyle windsurfing lies in three important areas. Firstly, you need less equipment. As Andy Gurtner, pro Swiss windsurfer and AW equipment tester, said about the allure of freestyle, “You only need one board, one mast, and two sails and you can compete. The board could be around 100 liters, which just happens to be about the most common size worldwide.”

Less gear makes travel a whole lot easier and keeps the dollar investment reasonable especially since you’re not throwing yourself into some Ho’okipa-size waves and breaking masts every day. The real key to freestyle, according to Gurtner, is to have more than one fin. I know fins can be spendy, but it’s far better to carry three fins around with you than another $1,500 board that gets occasional use.

Secondly, you don’t need much wind for good freestyle. Fluid, light air moves are like eye-catching choreographed dances on the water. The next time you’re out, try backwinding your rig in light winds. It’s easier than you’d suspect and it’s a lot of fun sailing backwards, steering your rig in this new position—and before you know it that move will turn into a heli-tack.

Thirdly, freestyle levels the playing field in competitions. You can’t be expected to compete with expert wave sailors unless you get to sail in Maui year round. But, you could go head-to-head with Web Pedrick on flat water lake sailing, and why not? If your local lake is small it doesn’t matter. Freestyle moves should be attempted often for success. As soon as you’re planing, go for a Duck tack or Hoss tack. Then return to planing and do it again—repetition is the key. Remember, many of Pedrick’s competition-winning freestyle moves come from flat water, light wind origins. When you advance in your freestyle abilities you can begin on Wymaroos and other such looping moves, but ease into them with something like a jump jibe first. Freestyle shows that you don’t have to be speeding around all the time to enjoy windsurfing; not that freestyle excludes speed though.

With today’s well designed freestyle boards you are not giving up much in the way of high speed performance when the wind does come up. These boards are capable and controllable in straight line sailing, yet they’re turny enough when the lake swell starts to build and you want the wave-riding feeling.

If you still believe that competitive freestyle is beyond you, then you should know that at least three competitors in last year’s Subaru Gorge Games Freestyle events—Nori Hubbs, Mark Doyle, and Jim Oaks—competed then in their first freestyle competition. That competition also included Web Pedrick, Chris Wyman, and the like. These newcomers all placed in the top four of their respective divisions.

I’ll leave you with one other thought:  Waterstarting was once a freestyle trick.