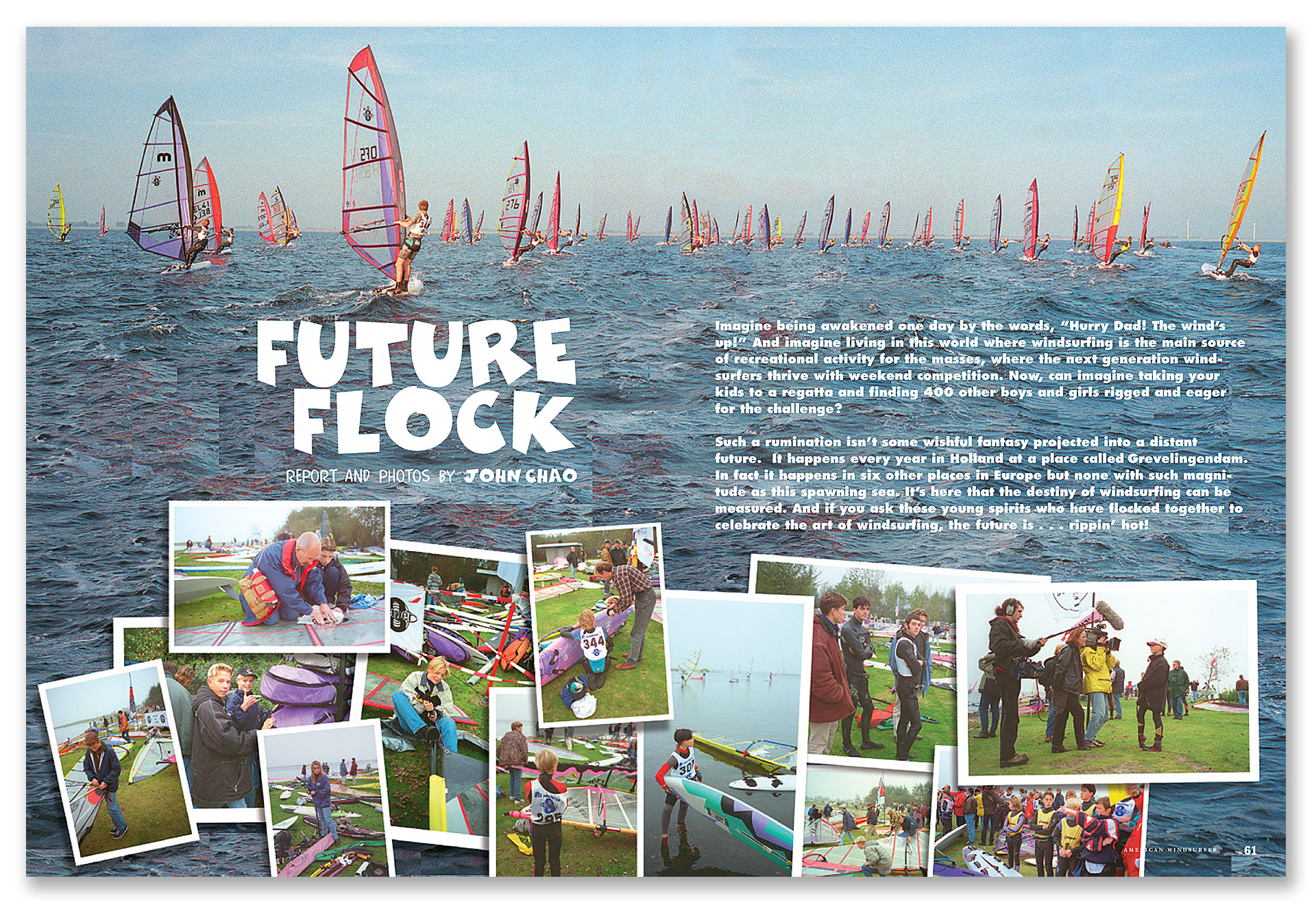 Imagine being awakened one day by the words, “Hurry Dad! The wind’s up!” And imagine living in this world where windsurfing is the main source of recreational activity for the masses, where the next generation windsurfers thrive with weekend competition. Now, can imagine taking your kids to a regatta and finding 400 other boys and girls rigged and eager for the challenge?

Such a rumination isn’t some wishful fantasy projected into a distant future.  It happens every year in Holland at a place called Grevelingendam. In fact it happens in six other places in Europe but none with such magnitude as this spawning sea. It’s here that the destiny of windsurfing can be measured. And if you ask these young spirits who have flocked together to celebrate the art of windsurfing, the future is . . . rippin’ hot!

American Windsurfer was invited by René Broos and Mark Thoms, organizers of the Dutch Super 8 Junior-Cup to Holland for a weekend. Their hopes were to have the magazine capture and bear witness to this phenomenal event known as “The Surfseries of the New Generation”. Had it not been for the organizers’ persistence, this was one of those invitations that could have easily been dismissed because of our demanding schedule.

Clearly there were brand interest and motivation here as Broos was the importer of Neil Pryde sails and Thoms the importer of F2 boards in Holland. But then it was the teaming of these two brands that created the Super 8 kids event some three years ago. Since then the Super 8 Junior-Cup has spread into Italy, Denmark, England, Holland, Switzerland, France, and Germany. Seven countries each with one of these two day events that culminates to one final event. Originally the race was designed around a simple figure 8 course; easy to understand and navigate. That is, until the organizers quickly realized that it became increasingly hard to keep track of the competitors as the numbers increased. The figure 8 course was eventually dropped but the Super 8 name stuck.

A DUTCH MORNING DAWNED WITH EAGER ANTICIPATION. Though gray clouds dimmed this photographers wish, the hazy event site still coughed to life like a human turbo prop winding to a roar. Wind gladiators with aged seriousness etched onto their charmed young faces tingled with suppressed excitement. Their muted reverence to the early morning spectacle keept pace with their sleepwalking scurry to ready their weapons of choice.

Already, the sea of 400 plus competitors had been partitioned into groups, each with their own towering “coach.” Juniors up to 18 years of age, were mixed with Grommets, made up of 13, 14, and 15 year olds, the Super Grommets, comprised of anyone below the age of 13, followed. They formed teams that gave a transitory sense of belonging and they gathered with their coaches to solidify their aspirations for team glory.

A walk through the rigging fields shed light to the range of competitive sophistication. Some orphan looking competitors rig their antiquated sails with gusto, ignoring the well- endowed racers with their doting pit crew parents. The have and the have nots are quite apparent to the casual observers, but not to these kids. They are here for the moment and the pure joy of the experience. I witnessed the euphoric acts of a few enthusiasts rushing to get their hand-me-downs to the water’s edge—as if, nothing mattered but to stand on the board and sail away—regardless of the wind condition. I stood in sobering admiration, wishing I was that young again.

THE SKIPPERS MEETING CAME TOGETHER LIKE INSTANT OATMEAL. No fuss, no hassle, no procrastination. Aren’t these kids? Shouldn’t the organizers have hired sheep dogs to herd the packs together? Apparently not. Motivation makes funny things happen, even early on a cold gray Saturday morning.

The gun sounded and the games were allowed to begin. Waves and waves of young kamakazi sailors headed for the starting line, all packed with high grade enthusiasm and many with limited skills. They attacked the starting line with starry eyed confusion and crashed with glorious innocence. No shouting, no cursing, just the look of what did I do wrong on both the guilty and the guiltless.

The early heats, each with 80 racers, eliminated themselves until the  final heat where the best 88 sailors fought for the crown. The winners wins among other things the privilege of representing Holland in the final event of the year which coincidentally was to take place at the same site the following weekend. Top individual winners from each of the seven country had the  added bonus of training with nine time world champion Bjorn Dunkerbeck in the Canary Islands.

TREATS WERE NOT LIMITED TO THE ACTIONS ON THE WATER. After all isn’t this  a Rock Concert? The evening activities came together also like oat meal. The feeding of the 400 was like a miracle, it just happened. The circus tent, lacking only the elephants and the lions, was center stage for the evening. Nils Rosenblad, sail designer for Neil Pryde flew 18 hours from Maui to jam with the band on his portable, take-everywhere guitar. Scott Fenton, the infamous mohawk celebrity of the windsurfing world, served as a coach during the day and a barber during the night concert.  Three long haired young studs took home the price of an authentic autographed Scott Fenton hair cut, signed trimmed and delivered on stage. “Him mom look what I won at the races!” Ugh. Faint. Crash.

The star of the night was however delayed. The private plane that was dispatched to Denmark to scoop up the guest of honor, ran into some weather problem. Finally, in the twilight of a dream world, where the young competitors could hardly keep their eyes open,  Josh Stone walks onto the stage to the cheers of a awakened crowd. Tired and hungry himself, after a long day of wave competition, Stone agreed to fly two hours in a small plane to Holland. Then, packed again into a small car with his cronies, another hour and a half drive.  Stone’s good will gesture quickly energized him as the sleepy crowd came to life and worshiped the Hawaiian icon.

The next morning before sun up the reverse trip had to be made to deliver him back to his own competition. It’s not easy being a famous windsurfer. Glory on stage is followed by a Powerbar dinner and seeking a room to sleep for a few hours with five other people. All this for a hour with the kids. Stone will be the first to tell you it was worth it. They looked up to him, he was their  Wind Star, always with a twinkle in his eyes and Maui in his blood.

THE SECOND DAY CAME QUICKER THAN MOST HAD WISHED. Even though the sun broke through, it was not properly greeted. Today the competitive engine seemed to have taken an extra hour to warm up and the wise organizers, anticipating this  phenomenon, had planned the day accordingly.

Racing became old hat and the skill level seemed to have refined overnight. Winners were cranked from heats with amazing efficiency and for most of the young competitors the climb was over, and they frolicked down the course or on the beach with their friends.

But for the contenders, it was time for business. Suddenly the stars came out and their sails were filled with stickers from sponsoring or non-sponsoring companies.

The final race was held and later, in the tent, the winners were crowned. On stage they triumphed and blushed as a Red Bull* beauty awarded them with trophies, prizes with kisses. The well attended crowd roared with their own envy and delight. The chance to win raffled boards, sails or accessories  quickly replaced thoughts of any eluded glory. Besides, raffle winners also received the lipstick mark of a Red Bull* kiss.

He was not in the front, nor was he in the rear, he was not gaining nor loosing ground, he simply was out there in the  middle of the pack. We marveled at the purity and the courage of his exsistence. It was clear, he was our winning pick.

A POIGNANT MOMENT CAME TO ME as we motored around the race course. This was the semifinal and all the competitors were of a superior class. Their gear was made to win and their skills matched their positions. Out of nowhere, a young man appeared in the middle of the pack. His nobility filled the screen as he clearly stood out from the crowd. He was not in the front, nor was he in the rear, he was not gaining nor loosing ground, he simply was out there in the  middle of the pack. We marveled at the purity and the courage of his existence. It was clear, he was our winning pick.

You might be thinking, this poor young man must have a physical handicap of sorts. To those of us watching, it was quite the contrary. This young man possessed something of superior quality. Whether he knew it or not, he had something money can’t buy.

In an age where prestige is determined by what you possess, this racer had a piece of antiquated equipment no one else had.

It may have been the only piece of equipment available to him. Some of his less sensitive peers might have laughed and jeered at him because of the ancient contraption that was two or three times as old as they were. Who knows what barriers this young man had to face, but one thing was for sure, he didn’t let the materialistic judgement of the world force him to stay at home. Whether it was confidence, courage, all of the above or none of the above, he was extraordinary—heroically standing against the forces of Formula One expectations.

In a sport that has become hyper sensitive to performance, we watched like proud parents of this young man’s achievements. His presence was a symbolic act that plugged the loss of millions of young talents to other activities because they are not willing or financially able to compete in a world that demands equipment supremacy.

In the boat with me were Klaus Michel, the director of all the Super 8 events, and David Jan E. de Zeeuw, managing director of Red Bull, one of the outside sponsors of the event. All of us stayed with him until the finish line, cheering and taking delight in the sense of accomplishment painted on his face. Then just as quickly as he appeared, he sailed to shore and was swallowed into the hubbub of the event site.

From a country that brought the story of Peter, the little boy who plugged a leak in the dike and saved Holland from the sea, young Pascal Tjon Pon Fong (bib #186) is our Hansje Brinkers windsurfing tale. His brazen act gives us hope to the possibilities of plugging our own windsurfing leak.

Red Bull* is a new energy drink out of Europe and a sponsor of the event.

Editors Note (January 9, 2016): So I was sitting in the boat with David Jan E. de Zeeuw (he gave me his card), managing director of  a new energy drink out of Belgian called Red Bull. He turned to me and said, “Hey John, we’re expanding into North America… you should get involved?” I looked at him with a smile and… “Thanks Dave! I’m afraid I’m already drowning with this magazine work.”