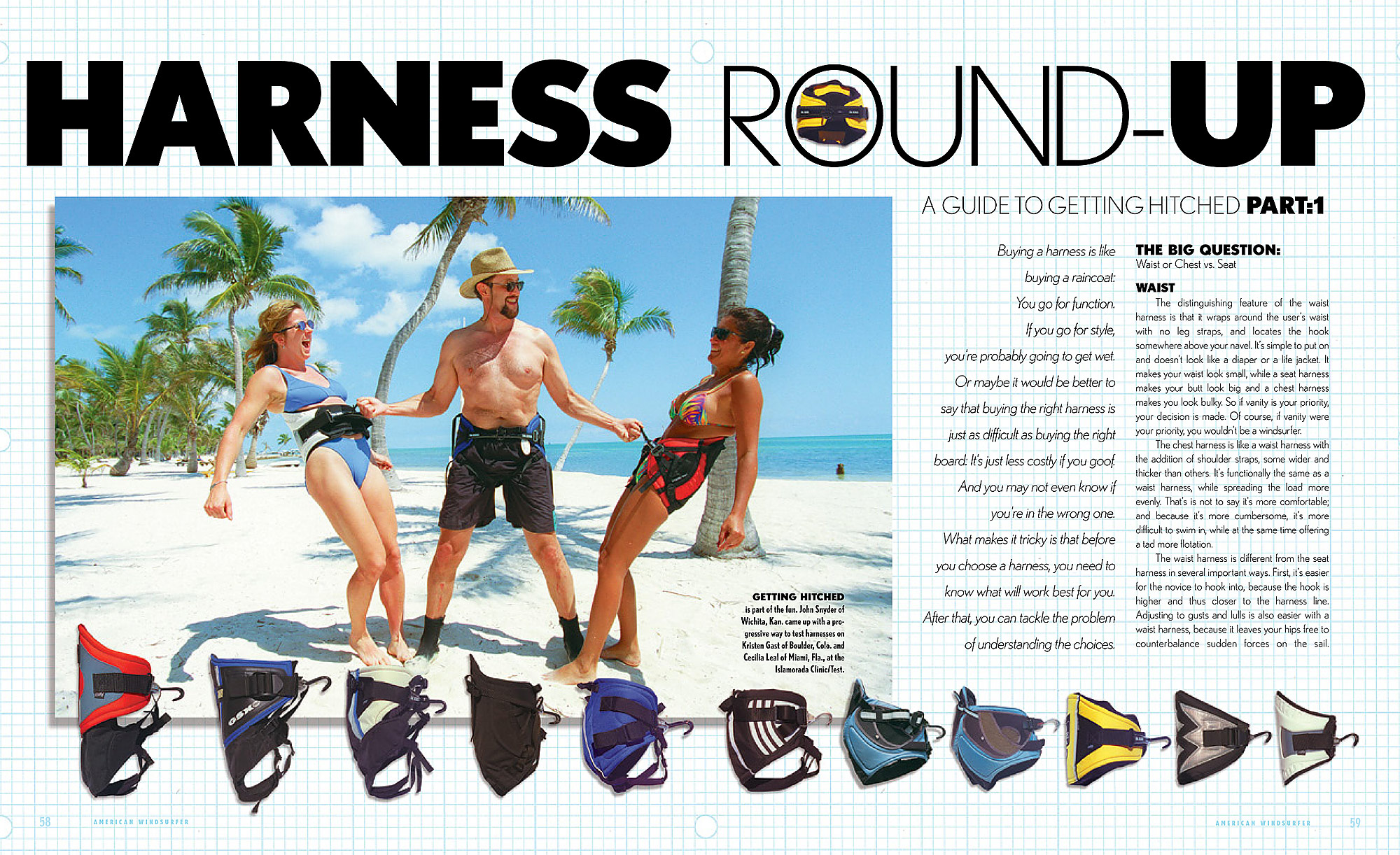 A Guide To Getting Hitched: PART 1

GETTING HITCHED
is part of the fun. John Snyder of Wichita, Kan. came up with a progressive way to test harnesses on Kristen Gast of Boulder, Colo. and Cecilia Leal of Miami, Fla., at the Islamorada Clinic/Test.

BUYING A HARNES is like buying a raincoat: You go for function. If you go for style, you’re probably going to get wet. Or maybe it would be better to say that buying the right harness is just as difficult as buying the right board: It’s just less costly if you goof. And you may not even know if you’re in the wrong one. What makes it tricky is that before you choose a harness, you need to know what will work best for you. After that, you can tackle the problem of understanding the choices.

The BIG Question:
Waist vs Chest vs. Seat

Waist
The distinguishing feature of the waist harness is that it wraps around the user’s waist with no leg straps, and locates the hook somewhere above your navel. It’s simple to put on and doesn’t look like a diaper or a life jacket. It makes your waist look small, while a seat harness makes your butt look big and a chest harness makes you look bulky. So if vanity is your priority, your decision is made. Of course, if vanity were your priority, you wouldn’t be a windsurfer.

The chest harness is like a waist harness with the addition of shoulder straps, some wider and thicker than others. It’s functionally the same as a waist harness, while spreading the load more evenly. That’s is not to say it’s more comfortable; and because it’s more cumbersome, it’s more difficult to swim in, while at the same time offering a tad more flotation.

The waist harness is different from the seat harness in several important ways. First, it’s easier for the novice to hook into, because the hook is higher and thus closer to the harness line. Adjusting to gusts and lulls is also easier with a waist harness, because it leaves your hips free to counterbalance sudden forces on the sail. A downside is that the hook tends to creep up, sometimes limited only by anatomy, if you happen to have significant anatomy there.

Advanced sailors often prefer waist harnesses in surf and rough water, because they allow more range of motion and thus greater facility in adjusting quickly to the constantly changing conditions. “Prefer’’ is the key word here: Until relatively recently, for example, Bjorn Dunkerbeck was known for using a seat harness even in the waves.

The waist harness requires fundamentally more technical sailing than a seat harness, so once you’re past the early stages of hooking in, the waist harness is somewhat more difficult to use. It requires an advanced straight-line sailing technique—a straight body hiked out well to windward and over the water—which is not only fast and efficient, but also easy on the back. When this technique is used, the problem of the harness riding up on the sailor’s torso doesn’t occur. In fact, the pull of the harness line on the hook is in a slightly downward direction, which tends to pull the waist harness to exactly the right position: just above the user’s hip bones.

Another difference between waist and seat harnesses is in the spreader bar attachment. Pretty much all waist and chest harnesses have sliding hooks, but most seat harnesses have fixed hooks. When the hook doesn’t slide, the sailor can’t easily twist his hips away from an alignment roughly parallel with the boom. When the hook can slide, the sailor can twist his hips forward to go upwind better.
And if you’ve got a sliding hook, don’t forget to re-center it before water-starting after a catapult. Otherwise you might find yourself trying to hook-in again, with the hook on your hip.

Seat
For an intermediate, the basic dilemma is that the waist harness makes hooking-in easier, but a seat harness makes powering-up both easier to achieve and easier to control. That’s because planing on shortboards requires the sailor to get his weight off his feet, and sitting down in a seat harness and hanging from the boom helps achieve that. However, the
sit-down technique is something many windsurfers never evolve beyond, and the seat harness often ends up supporting this butt-out bad habit. And this style requires longer harness lines—too long, usually—causing your arms to tire. Properly used, however—meaning a straight back—seat harnesses put no more load on the arms than waist harnesses.

For most good windsurfers, the seat harness is a comfortable and powerful aid to sailing with speed and efficiency. When the hook is positioned low, the seat harness puts the greatest sailing loads on the part of the body best able to handle them: the legs. This is particularly true for upwind, light or moderate wind, and flat-water sailing.

Instructional editor Mark Archer sums it up. “I’ve switched students from seat harnesses to waist harnesses, and from waist harnesses to seat harnesses. It depends on a number of things, such as their style, experience, size, and sometimes simply what they’re more comfortable with. But with either harness, your upper body should be just along for the ride. All the control is from the waist down. You hear sailors all the time complaining after a hard day on the water, how exhausted their arms and shoulders are. They should be saying, “My legs are killing me!”

Some Brief Specifics On Three Waist Harnesses
All three waist harnesses have a cummerbund-type waist band, but they differ somewhat. The Windsurfing Hawaii SS Series Waist has a built-in, removable plastic plate in the back panel for load distribution. The DaKine Power Belt incorporates two fiberglass battens for that purpose, and the DaKine ThermoForm relies on its soft thermoformed plastic construction. They’re all well padded and quite comfortable.

The Windsurfing Hawaii SS Series Waist uses a large ladder-lock buckle for cinching the two-inch-wide hook strap, and it’s easy to use. The DaKine harnesses use a stainless-steel buckle that’s less bulky, and also easy to use—after you read the instructions to figure out how. Both types buckle the hook tightly.

Some Brief Specifics On Five Seat Harnesses
The five seat harnesses that we tried at the Islamorada clinic were functional and comfortable. The Epic Gear Slalom Tech is the most heavily padded and least form-fitting of the four. With one-inch webbing straps rather than the standard 3/4-inch and a stainless-steel spreader bar instead of aluminum, it’s built for heavy use. The spreader bar strap buckle may not be intuitive—meaning your dealer should show you how it works—but it snaps in place quickly and works well.

The Neil Pryde Race Automatic harness is form-fitting and amply padded, with captured leg straps. It sports a unique ratchet-type cinching mechanism for the spreader bar, which is quick and easy to use, holding the hook rigidly in place. We tried two of these harnesses, and they performed well. But one of the plastic parts mating with the bar broke. Not a good sign.

The Neil Pryde Freeride is also a fixed-bar harness, with captured leg straps, but it offers a more conventional quick-release spreader bar attachment, and a slightly higher hook position. It’s not quite as heavily padded as the Race, but it’s well padded on the sides, where padding is most needed.

The North Sails Race is the least padded and most complicated of the four, but it’s the most form-fitting and comfortable. The attachment points for the leg straps are higher in the front than usual, which permits good range of motion in the sailor’s legs.

The DaKine Speed Seat differs significantly from the above four, in that its hook is two inches higher, which puts it just below the navel. It might be a good call for sailors who want a seat harness but would like easier hook-in. Or, there are always…

Combo Harnesses
Combo harnesses permit a range of hook positions, from moderately low to moderately high. They include the diaper-like features of the seat harness, with leg straps, but are generally worn higher on the body. Our recreational sailors in the clinic found them to be the most comfortable harnesses because they combine the easy-to-use high hook position with the sit-down sailing style.

The disadvantage of the combo harness is that it can contribute to poor form, because it makes the sit-down sailing style feel really comfortable. But, if your ambitions are limited, and you don’t really feel the need to stretch your sailing into the straight-back form, it may be the harness for you.

Some Brief Specifics On Three Combo Harnesses
The DaKine Surf Seat is the most unusual harness we tried. It’s really a convertible harness with a detachable diaper section. With the diaper on, it’s a combo harness with a mid-height hook. With the diaper detached, it’s an excellent waist harness. The windsurfer who knows he likes a combo harness but would like to experiment with a waist harness might like this one.

The easy chair of windsurfing is the DaKine XT Seat. It has the greatest bulk and highest back support. Our clinic sailors liked it a lot, partially because it spreads loads so widely with its web of hook-support straps, and partially because of the support from the high back. The downside, not surprising, is that this harness lured its sailors into sitting right down.The Windsurfing Hawaii GSX Seat has a medium-high hook. A plastic plate built into the back of the harness distributes loads, and the spreader bar is short. Its shape is not very contoured, which might be good for some sailors who want to work on their straight-body style without committing to a seat harness.

In closing: A Word On Injury
The subject of back injury comes up frequently in conversations among windsurfers. Actually, the sport is not particularly hard on the back (at least not after you’ve progressed through uphauling). In fact, it appears to be good for some back problems, and certainly limbers you up, which prevents back problems. But it is an aggressive athletic activity, and backs can be wrenched in crashes. Plus, there’s all that bending over during rigging.

Anecdotes are of little help in deciding which harness will be best for your aching back. Some sailors feel more secure with seat harnesses, some with waist. Windsurfers with back problems often opt for a combo harness. This latter fact suggests that maybe the problem is poor technique, which is caused by too little time on the water. For this we recommend frequent extended vacations—preferably at windsurfing resorts with good instructors.