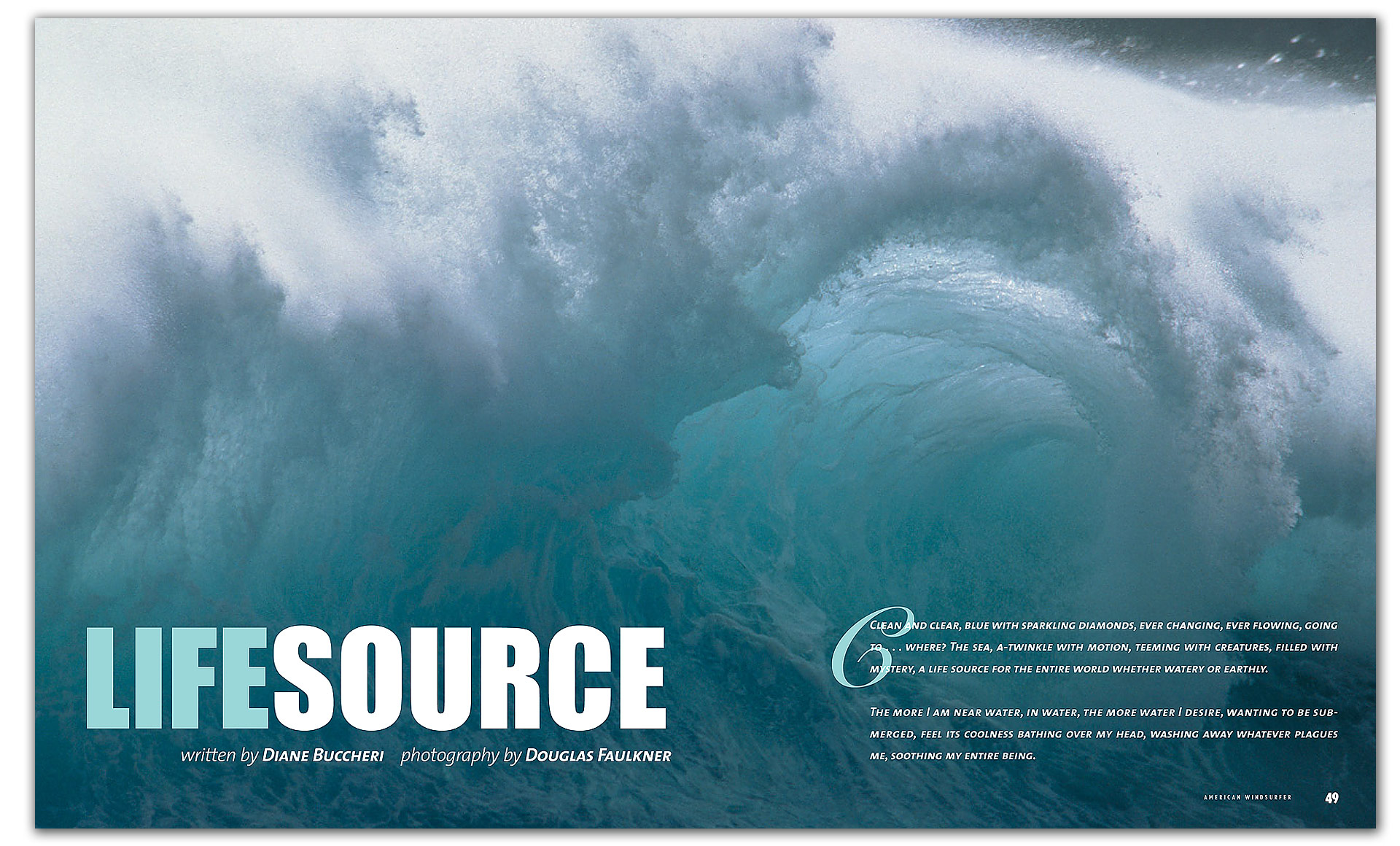 When in the first stages of learning how to windsurf, I caught myself allowing myself to fall for the sake of being submerged in the water…

Clean and clear, blue with sparkling diamonds, ever changing, ever flowing, going to . . . where? The sea, a-twinkle with motion, teeming with creatures, filled with mystery, a life source for the entire world whether watery or earthly.

The more I am near water, in water, the more water I desire, wanting to be submerged, feel its coolness bathing over my head, washing away whatever plagues me, soothing my entire being.

DRAWN TO WATER, I feast my eyes on the glistening flow, smelling its smell, watching its rhythmical movement, hearing its tinkling spill, is a never ending thrill, exciting, inspiring, and fulfilling.

Flying across water on a windsurfer, dazzled by its shine, challenged by its undulating contours, always awes me. Sometimes I want to shout with joy, sing, or remain beautifully silent, listening to the rush behind, in front, to the side, all around. When in the first stages of learning how to windsurf, I caught myself allowing myself to fall for the sake of being submerged in the water, covered by its glory, refreshed beyond comparison. Stop that! I had to reprimand myself. Now, stay on that board. At last I got over the whim, except now and then . . . I’ve got to drop the sail and dive in.

When the day is not an appropriate one to have a board under foot and sail in hand beaming a-top the brightly gleaming water, what is my next choice of pleasure? Why, a swim. Just to be part of it, floating, smoothly flowing through it and with it, bathed by its smoothness, I feel weightlessly free. Free, perhaps, from the boundaries of hard surface, walking gravity. I can twist and roll, dive and glide.

It’s a great escape from a loud, hard unstoppable world filled with pulsating needs and responsibilities tugging ceaselessly. It’s a quiet world far from everything, insulated and private, beautifully serene.

Maybe the water desire goes far, far back. So far back that we can barely fathom its depth in time much as the deep blue sea yet undiscovered by us mortal, limited humans. It may be a call of the wild in a social world needing rules, controlled rigidity. Perchance, it is a remembering —a genetic recall of long, long, long ago . . .

At one time life on the planet earth was solely bacterial. For 600 million years, only simple unicellular bacteria inhabited the earth. After that, during the longest stage of earth’s history, multi-cellular life came into being. Soft, shell-less beings, marine invertebrates such as jellyfish, remained the only life source for nearly three billion years. The next stage of life formation manifested protective shells and carapaces, which began probably 570 or so million years ago.

Since, this world has experienced explosion of diversified life forms. Creatures of unworldly make-up swam the seas long before we were thinking. All kinds of incredible things lived in the water and still do. The so strange gel-like, clear, tentacle zapping jelly fish have witnessed eons of change while remaining themselves the same—oh the stories they could tell!

What is known is that as things floated in the water, some of them began to direct themselves, hence making themselves less vulnerable to whatever lay in their path, more able to take what they needed. Then, plants ventured out of the water world, onto the earthy, dry ground, probably deposited by the land-kissing tidal froth onto the sand.

Next, as plants took root and adjusted to their new environment, animals, followed suit. As the sea level began to fall about 420 million years ago, some of the first fish with jaws developed lungs. The fins of some swimmers began to divide into webbed finger-like constructions enabling walking as well as swimming. 120 million years later, 350 million years ago, amniotic eggs appeared, causing a natural revolution. Life’s original aquatic environment was imitated outside of the reptilian mother’s body, bathing the growing embryo in liquid while protected by a shell. Still, today, human embryos live in a water world before their startling introduction to the airy atmosphere and all that accompanies it.

As the sea level fell, more land became uncovered from water. Huge dinosaurs and the preliminary mammals occupied this relative dryness, in marshy land. Birds, a branch of species which developed from dinosaurs, flew by wings, distributing plant seeds. In turn, a vast array of flora grew, feeding the mammals, aiding their evolution. Mammalian young survived more independently of their environment by feeding off their mother’s blood and milk. These placental mammals became crafty survivors,
unknowingly, developing their brain and physical skills. When humans began walking the earth,
tools came into use, raising humans above the rest of the animal world with their intelligent, out-witting skills.
Are we hitherto, three million years after our debutant, intelligently using outwitting skills? Indeed, we are using skills, transplanting ourselves far away from nature and its everyday perils of existence. However, for the most part people of modern society live in an air conditioned, or heated, insulated environment, and do not know which way the tide flows or which way the wind blows.

We have lost a great deal while gaining what we have now through human evolution. And, if we are not carefully, aggressively deliberate, we will lose a great deal more. Truly, our roots, all of earth’s roots, stay with us, are inevitably a part of us, no matter what. We are survivors. But we cannot, perceivably, conceivably, survive alone.

This planet is a water planet. 99% of the earth’s living space is water. Our brains are 80% water. Our bodies are 75% water. Most of what we eat and drink, according to natural needs, consists of water. Most of the earth is covered by water. Of course, under that water is land. Some of it is many miles below sea level. The average depth of the ocean is 12,300 feet. Mountain ranges higher than the Himalayas and four times longer than the Andes, Rockies, and Himalayas collectively, chasms deeper than the Grand Canyon, and plains more expansive than the Serengeti, exist yet unexplored by man in the inky dark, icy depths. Volcanoes surpassing those easily seen by land are alive within the salty deep. Creatures of unbelievable design swim far from our sight. Some, extremely rare forms of earthly life, live without dependence upon sunlight; they thrive on bacteria converting energy from chemicals in the water. It’s a world within this world that we have only glimpsed the magnificence of, minutely, on its surface.

Should we be in awe? Should we feel small?

Suffice it to say, respect is due. Technology has brought us to a point where we can begin to explore, deeper and deeper, and learn more. Our small land-locked viewpoint is opening wider and with that comes admiration and comprehension. There is much that is much bigger than us right here where we live.

However, human beings have survived so well that our success has caused destruction to elements of nature. Though the deepest part of the blue sea has not been touched by us yet, the atmosphere surrounding our planet has, with greenhouse affects more apparent all the time. The land along with the animal and plant kingdoms who are trying to survive modern technology’s consequences have been ravaged at times and in places by us.

For the first time in the history of the earth, the land has spilled manufactured waste onto the water, thus sucking some of the watery life to death.

Primarily, toxic run-offs from land have polluted coastal areas, making the water unclean. Its environment, supporting uncountable living plants and creatures, dies. The largest source of ocean pollution is run-off from yards, pavement, and farms. Fertilizers cause deadzones in the sea which lack oxygen. Though fertilizers help land plants grow, their high dosage kills sea life. Human waste along with industrial filth, both greatly pollute the coastal water, as is commonly known.

Out of sight, out of mind. Our sight is limited as water dispenses ingredients, making them invisible, un-smell-able, inconceivable, to humans who have dulled their senses with protected indoor living and machinery. It’s all there. Nothing has gone away. It’s lurking, alive, powerfully destructive. Oh what to do?

We are bringing destruction upon ourselves. Life is dying in front of us. We cannot survive with pavement, steel buildings, chemically made food contained and preserved in plastic, and dirtied water.

The entire ecosystem is fragile and vulnerable. All life depends upon the natural cycle. The cycle of life keeps circling in the minutest and hugest of ways. For instance, if you trace a line in the sand at a beach with your toe, that line may look straight. But looks are deceiving. Our confined perception sees it as straight. But if you were to keep tracing, and were to go half way around the world, then totally circumscribe the world, you would see from an eagle’s eye, sky point of view, that the straight line is undeniably a circle!

Everything in life is circular, following the cycle of life. Everything is part of the chain. When a person sneezes, many more are affected. When one person smiles, happiness spreads. When one diseased fish dies, many more do too. Then the sea grasses are affected, the shore birds in turn suffer, the Americans who, on average, each eat fifteen pounds of seafood annually, are affected as well as the fishermen catching fish to support their families, ad infinitum.

All of life is exposed and needing continuance of nature’s omnipotent natural cycle. Nature may prove her indomitable strength and humankind’s littleness. We may be nothing – powerless, really. Who’s to know now?

Oh! “Take me down to the sea I ask” where adventure willingly meets me where my being opens wide and my soul is set free. The vast expanse bides my longing spirit – to fly and bask in the wondrous beauty.

With ocean levels rising, will the waters rise to meet us with indescribable force? Either due to greenhouse effects or Nature’s ongoing cycle of global warming and cooling, Arctic glaciers of immense and seemingly permanent proportions are melting and the ocean level is rising at a historically unprecedented rate of two feet per century. The cold water is flowing from the north to the south, warming the north with its departure, pushing other waters from the south to the north. The water, as it travels, is warmed by the sun, hence carrying further warmth with it. It’s an ongoing chain of reaction increasing warmth with all elements related and affected. Warm water, as particularly opposed to thick ice, takes up more space. Will the balance of Nature be skewed, causing a devastating imbalance? At the same time the ocean is rising, more and more Americans are living by the sea.

It seems, people are drawn to its adventure and beauty. The healing powers of its beckoning mystery reach us, daring us to enter the realms . . .

Our manmade environment, though economically healthy by human standards, holds small regard for the whole picture of life on earth.

Beneath it all, all the pressure and stress, the loud oppressiveness, is a splendid kingdom filled with precious jewels beyond belief, treasures uncountable, power and strength past our control.