The shrink’s very first question was, “Is there anything in life you haven’t done that you would like to do?”

“These kids have only been sailing for a year? I thought of telling them about slipping and sliding down pine trees…but I didn’t want them to think I was old.” 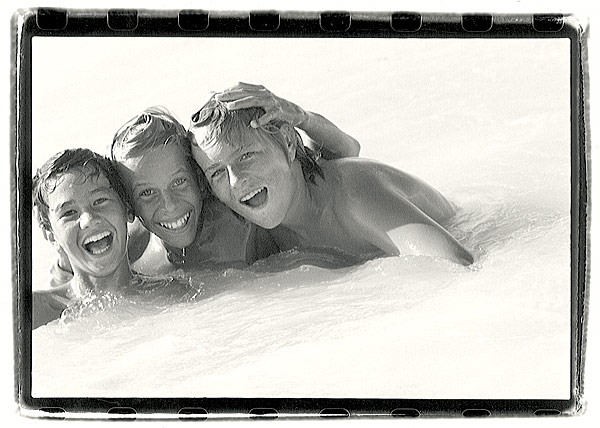 A FEW YEARS AGO, I was sitting in a shrink’s chair turning fifty. It seems I awoke one morning looking down the not-so-long barrel of life and realized that “whoa,- that’s not light at the end of the tunnel, that’s dark.”

The shrink’s very first question was, “Is there anything in life you haven’t done that you would like to do?” It was a sympathetic, but textbook, attempt to get me to realize that, regardless of the uncertainties that lay ahead,  I had actually had a pretty full life.

No doubt expecting something on the level of, “I’d like to see Paris in the spring” or “Trek the Himalayas” before I die, he was stopped in mid-analysis when I replied, “Well, I’d really like to be able to pull off a perfect, lay-down jibe and maybe even a passable duck jibe, before I die.”

After a crash course in windsurfing jargon – the term “powered up” is now a regular part of his vocabulary – my shrink tried to draw parallels to my childhood, which I informed him was impossible, given that windsurfing hadn’t even been invented then and that, in fact, I didn’t set a foot on a windsurfing board until I was forty.

The man had obviously never dealt with an aging windsurfer, and, while he had no doubt counseled a born-again Christian or two, he had apparently never encountered anyone who truly believed his life had been jump-started by a stupid sport.

“When I was a kid,” I said, “we used to climb to the tops of pine trees, the not-so-tall kind, with branches splayed out to the ground. We’d let go and free fall in a series of stutter steps, each branch semi-breaking our plunge to earth.”

I could see his mind working.

Whitecaps are to branches…

Stutter stepping is to chop hopping…

I was re-running this scenario the other day as I was basking in the aftermath of a thirty-knot Aruban wind when three kids came screaming around the corner into Roger’s Windsurfing Place.

Tom Lausman, Mark Cheung, and Melvin Mandel, ages 12, 12 and 13 respectively, had just gotten out of school.

The adult in me saw the perfect trio of models I needed for a health care photo I was to shoot during my stay on Aruba.

The kid in me saw something quite different and considerably more profound. Maybe it was because I had just been rehashing my return-to-youth psychoanalysis. But a more likely scenario was that I really “felt” like a kid which is what happens to us old guys after an afternoon of thirty knot-induced adrenaline rushes.

The three boys never broke stride. There was not a wasted motion in their headlong rush to get on the water.

They grabbed their boards and I grabbed my camera, which is what a photographer does when confronted with incomprehensible profundity.

A half dozen frames later they were on the water and out of sight.

At the end of the day, I hired them as models pending parental approval.

Instead of sailing after school the next day, they met me in front of the Huts and we spent an hour doing a photo shoot. When it was over, I told them I’d shoot them sailing, which I more or less passed off as a favor. The truth, of course, was that, beyond the primitive notion that a photographer steals your soul, I was mindful of stealing something from them, although I wasn’t quite sure what it was.

Watching them sail, I knew.

They were the eternal kid in all of us and their high-speed runs and hero jibes left me feeling good right down to my Okespors.

Tom, Mark and Melvin were excellent windsurfers. Sailing just inside the beach, full of themselves, they were every kid having fun.

Every old guy I know who windsurfs thinks about the number of years he has left. Not to live, but to sail. It’s no small indication of the love of a sport. I figure I’ve got twenty years, if I’m lucky and the water stays soft. Tom, Mark and Melvin have an entire lifetime of windsurfing to look forward to.

For a brief moment, I thought of telling them about slipping and sliding down pine trees but thought better of it. How does a kid relate to the caressing branches of a white pine tree when he’s grown up in a place where everything that grows has razor sharp fronds, two-inch needles or looks like a cactus.

Besides, I knew they looked at me as a windsurfer and I didn’t want them to think I was old.