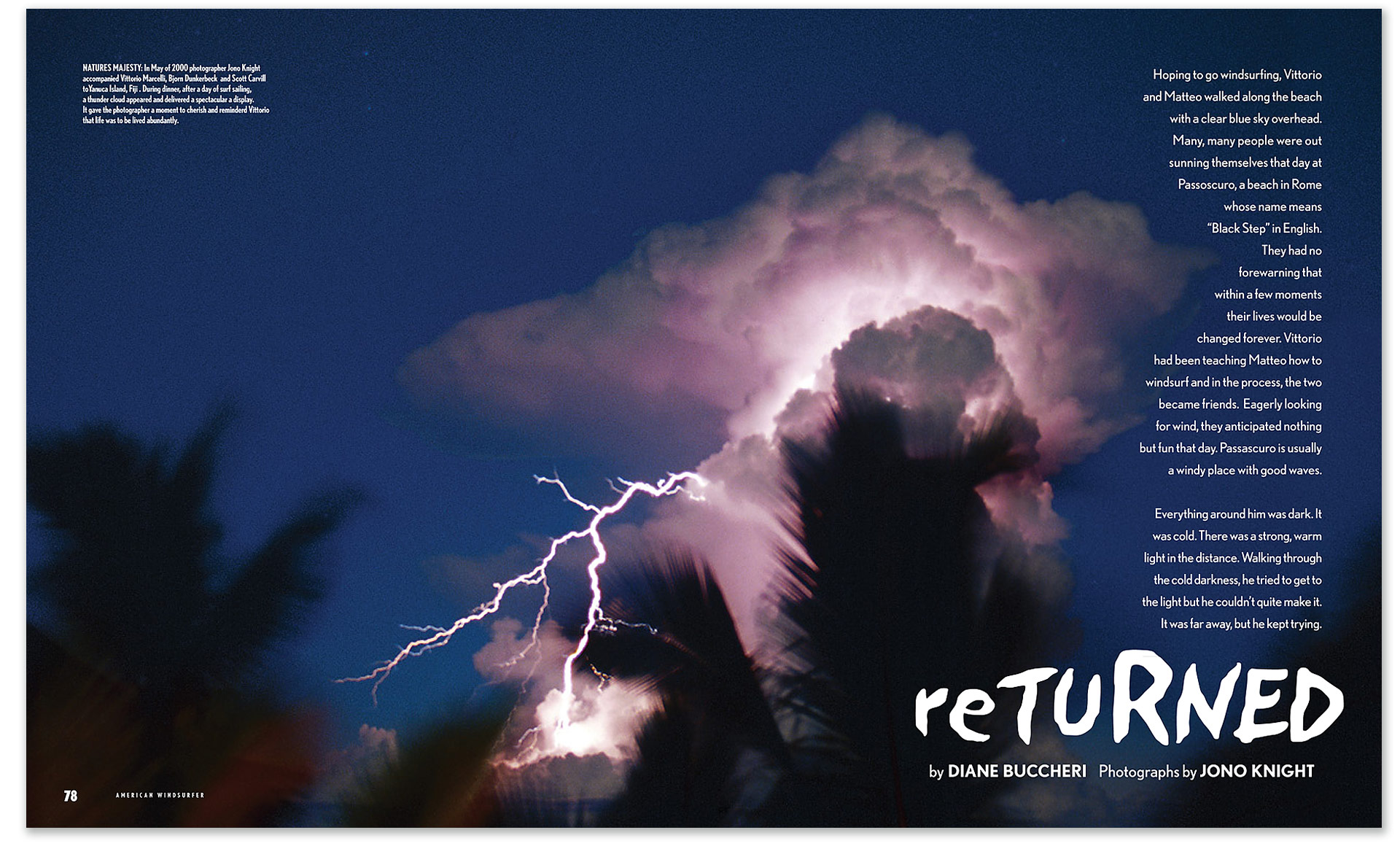 Walking through the cold darkness, he tried to get to the light but he couldn’t quite make it…

NATURES MAJESTY: In May of 2000 photographer Jono Knight accompanied Vittorio Marcelli, Bjorn Dunkerbeck  and Scott Carvill  toYanuca Island, Fiji . During dinner, after a day of surf sailing, a thunder cloud appeared and delivered a spectacular a display. It gave the photographer a moment to cherish and reminded Vittorio that life was to be lived abundantly.

HOPING TO GO WINDSURFING, Vittorio and Matteo walked along the beach with a clear blue sky. Many, many people were out sunning at Passoscuro, a beach  near Rome whose name means “Black Step.”

There was no forewarning that within a few moments their lives would be changed forever. Vittorio had been teaching Matteo how to windsurf and in the process, the two became friends.  Eagerly looking for wind, they anticipated nothing but fun that day. Passascuro is usually a windy place with good waves.

Everything around him was dark. It was cold. There was a strong, warm light in the distance. Walking through the cold darkness, he tried to get to the light but he couldn’t quite make it. It was far away, but he kept trying.

WIRED WITH NATURE: As if struck by lightning wasn’t enough power, Vittorio’s life changing experience made him become a professional windsurfer, surfer and kite surfer in search of natures power.

Dazed, Vittorio woke up on the beach with Matteo next to him and people all around. They told him he and his friend had been struck by lightning. Soon after, a helicopter flew them to a hospital. He had been unconscious for five hours, “sleeping” he calls it. An electrocardiogram showed his heart rate was too fast to survive, and his blood pressure was dangerously high.

Vittorio’s body had been nearly dead those hours he spent in the cold trying to get to the warm light. He wasn’t afraid. Unbeknownst to him, with one violent bolt, he and Matteo fell instantly and knew no more. No pain. No consciousness. No awareness of each other. There the young man and boy lay teetering on the edge of life, close to death.

Electrified, Vittorio’s heart beat at a critical level, doctors prepared for the worst and considered his survival a true miracle. Upon “awakening,” Vittorio learned of Matteo’s fate. Why? Why, was all Vittorio could think, did it happen? And why did it happen this way? Why did his friend die? He was twenty-four years old then and Matteo was only twelve.

Had Matteo felt the cold dark and seen the warm light? Did Matteo reach the light? If Vittorio had reached it, would he have crossed the threshold from life to death? Vittorio lived in darkness on earth. He became depressed. All that happened weighed upon him heavily. No other bolt of lightning struck Passoscuro that day. There was no ensuing rain. No doom loomed in the air.

He was happy to be alive—very. But very unhappy his young friend died right alongside him. Unquestioningly, for Vittorio, life changed.

That was five years ago. He realized life is strange at times. You are here one minute but can be gone the next. When your time to go comes, it comes, and sometimes with no warning or reason. “Now, when it’s my turn, I’m ready,” he says, not scared of death but scared of suffering through life with cancer or something similarly painful.

He couldn’t return to the restaurant he owned on the Roman beach. He had other things to do and new values. Without hesitation, Vittorio Marcelli sold his restaurant. He was born again, almost. Before the lightning hit him he wanted things money could buy—expensive fast cars, a big house, a boat. Plans for the future motivated him towards prosperity. More than anything, the future held importance. Long hours of work filled his day and only when there was extra time, he windsurfed. After escaping death and losing a friend with nothing but his future ahead of him, Vittorio threw it all to the wind.

And to the waves.

Life is now and life is fun. The future is important but life, while you have it, is to be lived and enjoyed. “Today I’m here, tomorrow, I don’t know. If I wake up in the morning and feel okay, I go windsurfing,” Vittorio says pleasurably.

Björn Dunkerbeck bought a newspaper in Madrid and was himself struck with the picture of his friend on the front page accompanied by, “ITALIAN STRUCK BY LIGHTNING SURVIVES”. With the media immediately covering his story widely Vittorio was made famous throughout Europe.

Without delay, he joined Björn. Working, traveling, and training together, Vittorio began to help Björn with his competitions. Friends since 1990, they met on Maui, aged nineteen (Vittorio) and twenty-one (Björn). Now twenty-nine and thirty-one, the two sail, living for wind and waves. They live together ten months of the year, spending six of those in Maui, traveling the other four. Travel stories grow from their adventures as well as the search for ever bigger waves powered by the wind. This year, they will sail the waves of Madagascar, Sardinia, and Chile with other destinations not denied. As a professional windsurfer, Vittorio makes more money than when he spent all those hours as a restaurateur and is very happy. His home and possessions are rather simple; it’s what happens on the water that matters.

It’s the good lifestyle with real quality of living that Vittorio wants and has. Windsurfing is his main focus, but so every day can be good, nothing missed, he also kitesurfs and surfs. When waves are big with no wind, he surfs. When the wind is up but the waves aren’t particularly great, he kitesurfs. When wind and waves come together, he’s out there  ripping it up with board and sail.

And sometimes he’s swimming. That is, swimming equipment out to Björn during competitions when something breaks. It may seem easy, but it isn’t, being the caddy for the 12-time World Cup Racing Champion. It’s not Björn’s famed attitude of coldness nor is it his “Terminator” reputation. In fact, Vittorio says Björn is a very warm person; just a regular guy.

A great deal of responsibility lies upon the shoulders of a champion’s caddy because the competitor relies upon him to make sure all the equipment is in top notch condition, put together precisely, and ready to go. And backup equipment must be ready to go in case of a necessary change or replacement. “I have to rig very well, exactly as he wants it.” If anything breaks on the water, Vittorio awaits, ready to replace it, as fast as he can get it there. He’s got to swim back with the broken gear too, of course.

BjöRN’S BESt FRIEND: Being struck by lightning changes your life, being Björn Dunkerbeck’s best friend might have the same effect. (above top) In the early days of visiting Maui.   (the rest) Globe trotting around the world as Bjorns’ caddy

Though his duties for Björn are demanding, he first thinks of Björn as his best friend. They are like brothers. Then he thinks about their job together. As he intimates, “The guy is a champion to the outside world but inside he is open to everyone and helps a lot of people, especially sailors. He is a good guy.”

Vittorio freely states that he felt okay when Björn lost the title in 2000’s competitions. “Björn was tired of racing. It is good for the sport to change. Windsurfing has been boring because he won for twelve years. Björn won everything,” he points out with his thick Italian accent. Very strong with no injuries hindering his performance, the champion needs a new challenge and will spend his energies wavesailing. On the waves he is “very fast,” and Vittorio is “sure Björn can win the Wave World Cup this year.”

Affiliated with Björn’s Proof business, based in Gran Canaria, Vittorio rode Proof boards for a few years. Then Drops made him an offer he couldn’t refuse. Both Proof and Drops boards are “very great.” With the Italian Drops company, he finds testing and communicating easy. His experience with Proof was a good one, which taught him everything about board shape, fin shape, etc. Is it a problem between Björn and him that Vittorio now sails Drops? Lightheartedly, Vittorio answers, “That’s life.”

“For me, windsurfing is life. It opens me mentally. It’s hard to describe all the sensibilities, but, when I’m alone riding a huge wave, it’s competition between the wave and myself. The feeling is great. I feel free. I feel unbelievable. I love everything about the water. When I jump in the water, I feel like a fish and could swim for hours and hours. And I love the waves.”

As for his future, Vittorio has his life and the “talent to windsurf . . . will do it”. Without a doubt, he wants to ride big waves, the bigger the better, alone. Where there is the perfect spot with the perfect wave, he will go. When his body loses its performance, windsurfing will not be a passion of the past. He, like Björn, will work in the industry. Maybe when they begin to wear out, a sailboat will carry them along the waves. Carrying the meaning of his name, victory, with confidence towards the future, Vittorio feels the power.

Associate Editor Diane Buccheri tried to conduct this interview in Italian but found her adopted tongue a bit rusty. She was the author of the controversial article entitled “Lifesource”.