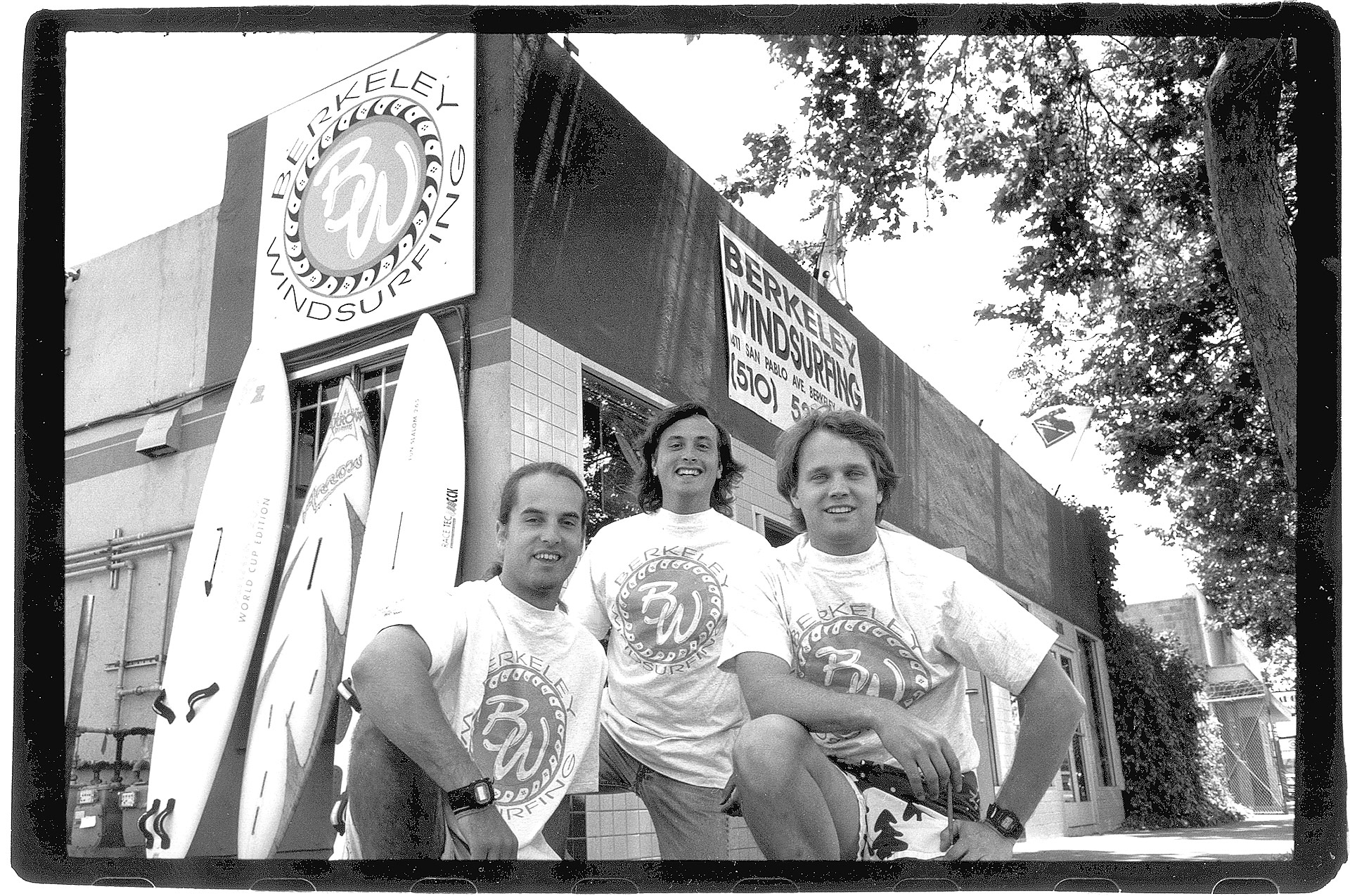 Will Harper following the windsurfing passion with skip Boman (left) and partner Pat Danley in front of their new Berkely shop.

“I really should have seen it coming.” I thought as I flew through the air and slammed into a wall of bullet-proof glass. I had just lost a bond hearing, and my client was apparently not impressed. I suddenly realized why cops normally handcuff prisoners with their hands behind their backs instead of in front. Two hands clasped together like that make quite a potent weapon. Unfortunately for me, the jailers at the Boulder County lockup weren’t so careful.

It was December 1990 and I was back for my last year of law school. Sleet, mixed with snow and other ugly stuff was falling from the sky outside. I was interning with Legal Aid, and it wasn’t going so well. What was worse still was that winter exams were only a week away.

I got home around six that evening. My client probably got home before I did. After we lost the hearing and he slugged me, his ex-wife (the alleged victim) bailed him out anyway. She could have saved me the trouble (and the lumps). I took a minute to look around my apartment. It was a really lame apartment. The only decoration was my windsurfer hanging over the sofa. Just its presence in the apartment could be quite a comfort at times like these. I stared at its curvy lines like a pervert, imagining the things we could do together. “Seatrend, take me away!” I shouted like the woman in the Calgon bath oil beads commercial who, upon a similar command, gets  magically transported to a tropical paradise. The only thing that happened was a knock on the paper-thin wall and a muffled “Shut up you dork!” from my neighbors (two lesbians from DesMoines, if you can believe that) next door.

This was December, after all, and it was exam week. I had to face the fact that there was no magic gonna happen.

Days like these cause people to re-evaluate life. I had  already done that last summer — I wanted to windsurf. I simply could not look forward to a life of interrogatives, subpoenas, and briefs. So far my only client had been so grateful for my services that he beat me up. My dreams of an L.A. Law lifestyle had been shattered. Instead, I now dream of carving jibes, starboard ramps, and lofty airs. I looked at the mountain of books in front of me and cringed. I looked at the sleet outside. I looked at the books. Why was I so diligently pursuing a path that was taking me farther and farther from the life I wanted? I looked at my windsurfer. I looked at my books. Board. Books. Board. Books. I went into a trance: the clock ticked, the sleet pelted the windows, the two girls next door started groaning through the wall (beats studying, I guess).  Finally, the phone rang.

It was an old friend now living in California. Sun. Beaches. Wind! What a bastard. I looked out at the sleet. Why is this jerk calling me? He was rambling on about this windsurfing shop he was working in and now had an opportunity to buy. What’s this? Purchase? Imagine that. Ten years from now when I’m a broken down Public Defender in a shiny suit he, the college dropout, will be a well-respected businessman. Probably a millionaire. A tan millionaire. A tan millionaire that can loop! Arrgh!

“That’s not what I was calling about. I…”

“Never mind about that. Never mind any of it! Save me from this living hell, let me work for you.” I pleaded. “We could be partners. I’m great at business: I was  the assistant manager at McDonald’s!” It was true ( a cruel joke by my parents) but what it had to do with anything is anyone’s guess. It seemed to be working, though.

“Well, I should warn you about this place…”

“Beautiful name!” (Never heard of it. Sounds like Shangri-La. I’m going to learn to loop!)

“You should probably think about this,” he cautioned. “Have you ever been here before?”

“No, but it doesn’t matter,” I reasoned. “The last time I thought things over and made a rational decision I ended up in law school. Just send me the papers and tell me where to sign. We’re gonna be rich!”

The vision of my new life as a tan and looping millionaire buoyed me along through the last semester of school. Reality hit hard, though, when in the spring of 1990 I stood staring at the turgid grey-brown water of San Francisco Bay. I had imagined Alameda as an island paradise with grass huts, coconut trees, and scantily clad women playing seductively in the surf. It’s not.

Alameda was actually created by a secret Navy project in which they extruded five square miles of New Jersey and dropped it into San Francisco Bay (they needed a place to park their boats where people wouldn’t complain). The result was a cultural and aesthetic black hole that accounts for the consumption of a full two thirds of the world’s Cheese Whizz. This might not be so bad if they hadn’t also placed it in the one and only non-windy spot in the bay.

“What am I doing here?” I wondered. I think somewhere I had seen a travel poster for Antigua and gotten the two islands mixed up. A fairly easy mistake after all. I watched the tide recede, leaving a brackish muck behind.

“Where are all the windsurfers?” I asked hesitatingly, hoping for an answer that would keep me from learning that I had just screwed up big-time. Like maybe everything was just on loan to a movie set and would be back tomorrow (the sand, surf and seductive women).

“Nobody sails here much anymore, but it was a real popular spot back in the eighties.”

“Nineteen eighty what?” I asked.

B.C. (Before Cambers): the ice age. When Pterodactyls  roamed the skies and Neanderthal warriors would bravely sail winds nearing 10 knots. When an “equipment freak” was a guy who had two daggerboards. When Alameda Sailboad (my vehicle to fame and fortune) was a viable business. My world crumbled as I finally realized that Jimmy Buffet wasn’t going to write a song about this island. I also realized that the windsurfing business was probably a lot like being a lawyer in one way: if it was easy, everybody would do it—and, well you know…

It was going to take a lot more than my McDonald’s training to make a living here.

The following three years went by in a sort of blur–—lots of sailing, lots of new friends, no money. Alameda Sailboard didn’t make it, but (contrary to any form of rational thought) we opened a new store in Berkeley which is a relative success (which translates to being off welfare, but just barely, and probably not for long).

The bottom line is that it is now three years later and I still can’t loop (although I have had a few accidental half-rotations) and I’m not rich. My permanent suntan consists of a two inch dark band around my ankles between where my wetsuit ends and my booties start. It isn’t worth showing to anyone.

I miss Colorado. I miss the courtroom. I miss the late nights reading to the muffled sounds of my happily groaning neighbors (although I’ve heard of a place in San Francisco, where, for a small fee…). My former best friend and business partner is now “the guy who ruined my life” -(especially according to my parents). And worse of all, women who were once attracted to this dashing young attorney now view my destitute corpus with humiliating pity.

You have to look at the bright side, however. I carry a pager, but it tells me when it’s windy, instead of when a client gets arrested. My V.W. bus gets better mileage than a Jaguar would. I force myself to focus on that which may yet be attainable: a million dollar year (via the lotto), an awesome tan (frequent trips to Maui) and a killer forward loop (lots of Ibuprofen–—pronounced “I.B.hopin”).

Three simple goals, one simple life. It seems obvious to me:

Why I’m not a lawyer.