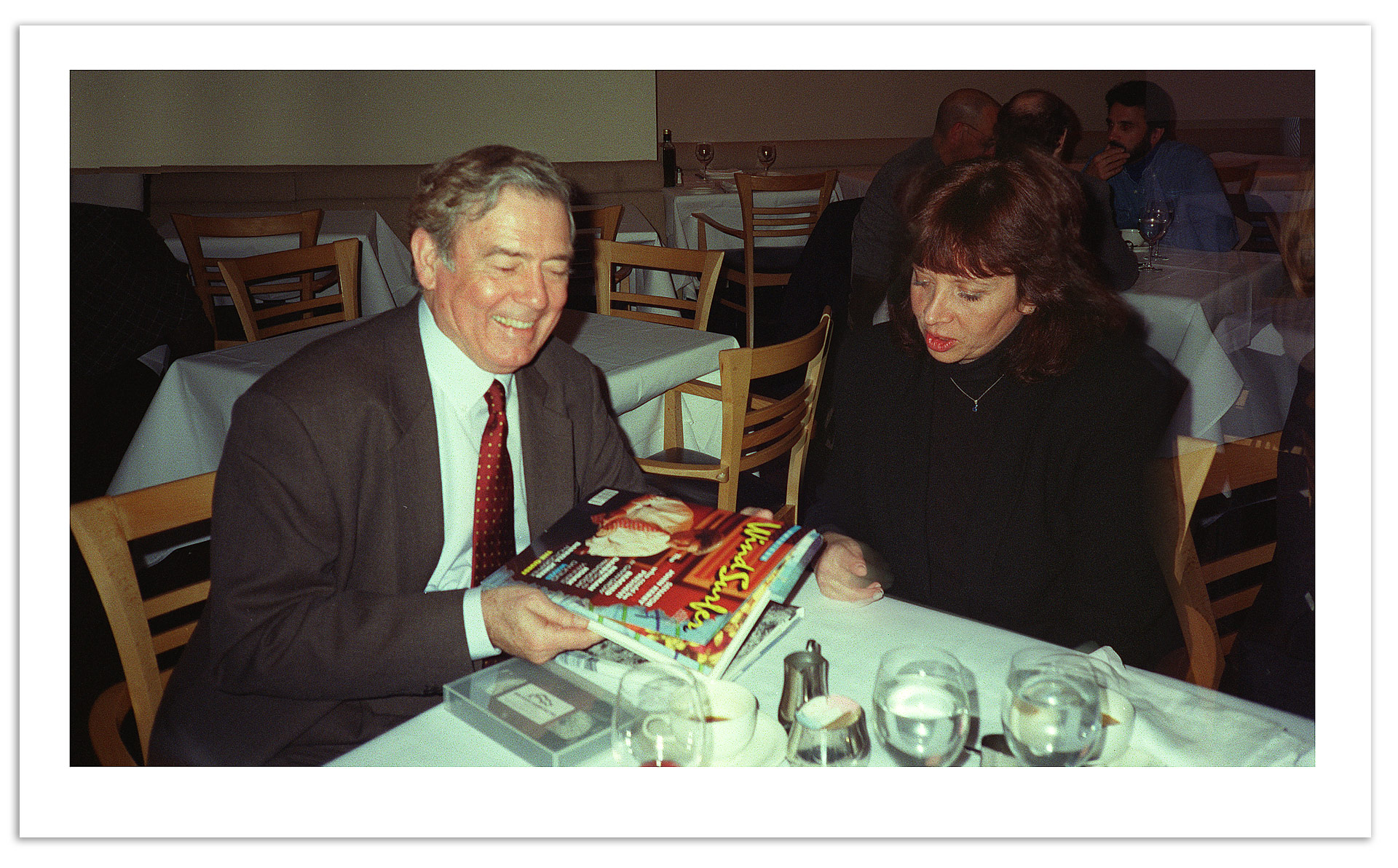 (above) Lunch with Dan Rather, CBS news anchorman, discussing Senator John Kerry’s interest in participating in the next Trans-Atlantic Windsurf Race the TAWR2000. 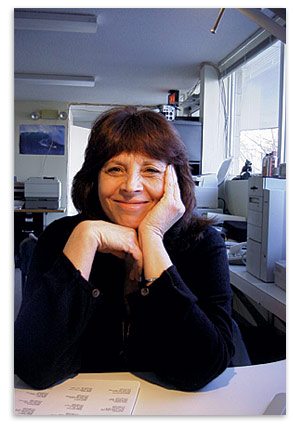 With this issue, American Windsurfer welcomes Laurie Nadel as a Contributing Editor. We met her for the first time, in September 1998, at Greenwich Point Park, a Connecticut beach where the U.S. team was getting ready for the first Trans-Atlantic Windsurf Race (TAWR98). She appeared along with a crew from Hard Copy and introduced herself. It turns out, Laurie had a longstanding interest in Trans-Atlantic windsurfers. In 1986, she wrote and photographed a story about two young Frenchmen, Stephane Peyrone and Alain Pichavant, who arrived in New York harbor on a 31-foot tandem sailboard, the Liberte de Timex, after windsurfing across the Atlantic.

Granted an exclusive interview, Laurie had never heard anything like their stories. “After listening to them describe the storm that wash
ed their radio and fresh food overboard, the skin fungus they developed after days of exposure to salt water, and how they napped by resting their heads on the boom, I couldn’t help thinking that this underreported venture was as stunning a feat as climbing Mount Everest.”

As adventurous and remarkable as their voyage was, Laurie’s own windsurfing journey is equally compelling, in its own right. “I’m probably the world’s biggest klutz!” She explains in her article, “Blast from the Past,” that begins on p46. It took her a month to stand on a board, something that most people get in a day or two. “The process was slow and difficult for me. I reread Eugen Herrigel’s 1953 classic, Zen in the Art of Archery, a story of a man from Germany who goes to Japan to study with a master archer, trained in the Zen tradition. It is said that Zen archers who have mastered ‘the artless art’ can hit the center of the target, blindfolded. Not only that: Subsequent arrows will split the first arrow down the middle!”

As Herrigel discovered, the type of lessons required was unconventional, at least by Western standards. Take lesson number one, for example: How to hold a bow. Incredible though it seems, Herrigel’s assignment for the first year and a half, was just this. Hold the bow. No arrows. No shooting. Just hold the bow.

For Laurie, “Herrigel’s description encouraged me to be patient, especially when rigging. Eventually, windsurfing taught me mindfulness and the strength of solitude. It honed my sensitivity to the sea’s spiritual presence, a necessary counterbalance to the extremely fast pace of the CBS newsroom, where I worked as a writer.”

Windsurfing became a way of life for Laurie and her husband, who sailed on Long Island, practically every weekend. Vacations were spent exploring foreign waters. “In New Zealand, I got to meet Bruce Kendall and Grant Beck, contenders for their country’s Olympic windsurfing team. Windsurfing with an Olympic-level athlete was as mind-blowing as a tennis novice who gets a chance to practice with Martina Navratilova,” she observed.

Returning to New York, expecting another six-month windsurfing season, Laurie found that she was pregnant and gave birth to a daughter.  Shortly afterward, she came down with chronic fatigue syndrome and ended up on disability for two years. She recently told us. “Looking back, I’d have to say that the illness was a major turning point. It forced me to make lemonade out of a situation that could have turned to bitterness and disappointment. I know I would have stayed in the same job rather than take the risk of becoming an independent writer.”

Getting back on her feet, Laurie wrote several books, including the international bestseller, Sixth Sense, which led to a guest appearance on Oprah!, and a biography of former President Richard Nixon, The Great Stream of History, which was nominated for eight awards and became the subject of Dan Rather’s radio column during National Book Week. As she began to write more health and behavior stories for various magazines, including Men’s Fitness, Laurie became so intrigued by the psychology of peak performance, or flow, and its opposite state, performance anxiety, that she enrolled in Greenwich University’s independent study program in psychology, which eventually earned her a Ph.D.

But, as her new career got back on track, a series of financial and marital crises took their toll and Laurie was hit by another health crisis. This one, a severe, sudden-onset condition called adult-onset asthma was not properly diagnosed at first, and she almost died. This time, doctors said that she would be disabled for the rest of her life. It was then that Laurie came to realize how important windsurfing had become. “Windsurfing had opened up a dimension of life that took me outside my everyday world and expanded my horizons, in every sense of the word. It taught me that persistence really pays off. It showed me that it was okay to make mistakes in front of other people, even if they laugh at you. It brought me new friends and opportunities to write about extraordinary adventurers” she observed, adding, “to windsurf, each time, is to open your eyes and heart to the beauty and power of the most primal forces in nature, sea and wind. Each session is different, which helps you to see every ripple in the water, and each cloud in the sky, as if for the first time. It forces you to leave your problems on shore and to let go of anything except the present moment. In fact, you can’t worry about anything or you’ll fall off!”

Looking back, she remembered what it was like to replay some of those windsurfing highlights in her head, even when she was too weak to sit up. Since then, Dr. Herbert Benson of Harvard Medical School, author of the bestselling book, Timeless Healing: A Biology of Hope, has done pioneering research in the field of psychoneuroimmunology, also known as mind-body healing. Dr. Benson’s findings show that focusing on positive memories of “Remembered Wellness” can actually promote healing. “It still amazes me to think that replaying those images of skimming across the water may have helped to reboot my immune system,” Laurie said. “Without a doubt, the gifts that windsurfing brought into my life inspired me to get well and start over!”

We don’t want to give away the plot here since Laurie is almost finished writing her current book Dancing with the Wind: A Woman’s Version of Zen in the Art of Windsurfing. (You can catch a sneak preview of Part One, at www.americanwindsurfer.com) It is, by the way, the first “Zen in the Art…” book ever written from a woman’s point of view. Dancing with the Wind will be the first book in Nadel’s series of Zen windsurfing chronicles. Her next book, The Color of Wind, will open in Fortaleza, Brazil, the finish line for the next Trans-Atlantic Windsurf Race (TAWR2000). (Thetitle comes from a Zen koan, or teaching riddle: What is the color of wind?)

Laurie shrugs, “Well, I guess it will depend on the wind…”