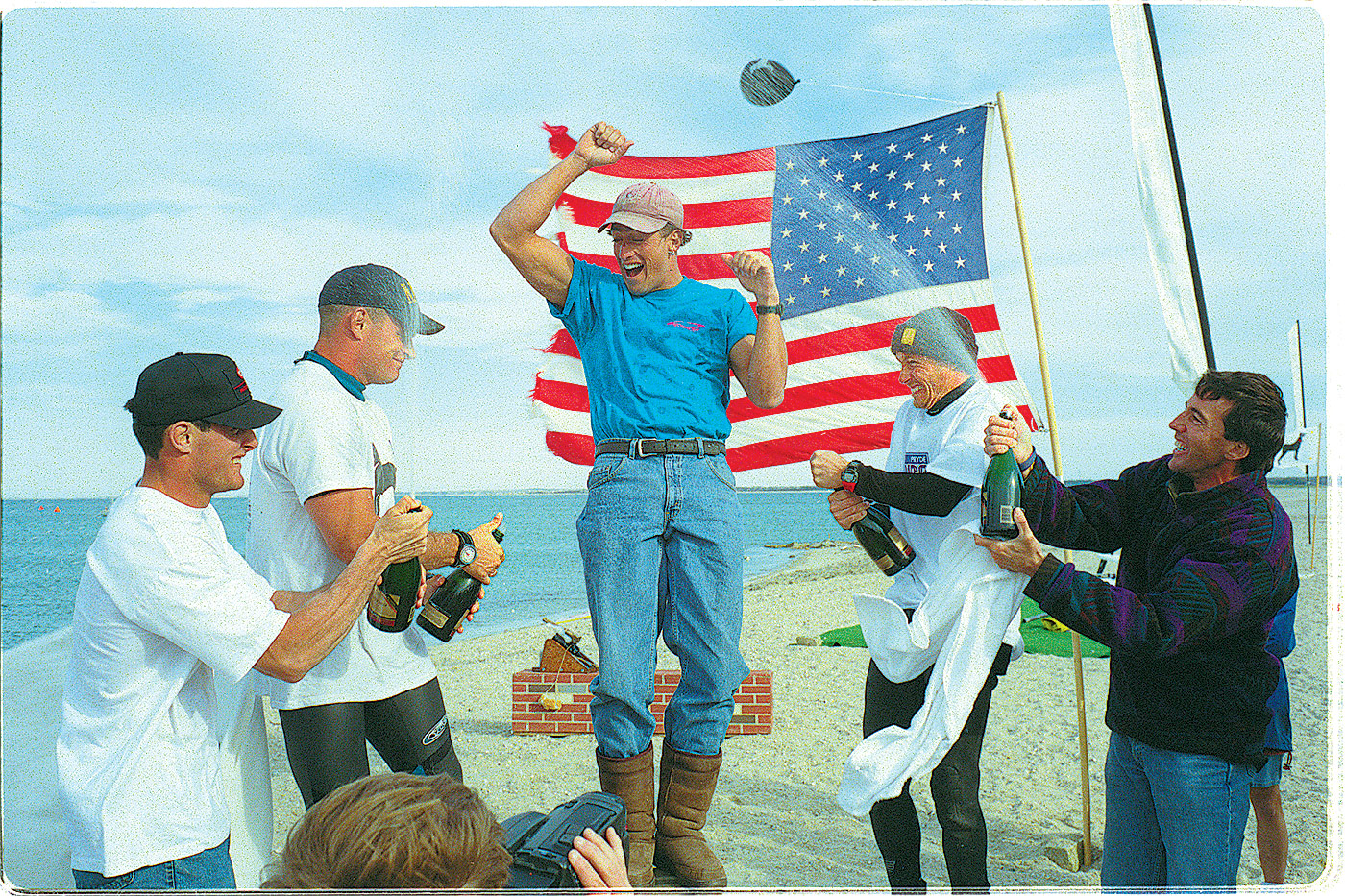 What happens when you piss Jamie Douglas off ?

WELL… he gets even. It seems that Douglas  drove 18 hours to a race in Hatteras, and on arrival, found out it had been cancelled. No notice. No warning. Just cancelled. What irked Douglas even more was the unprofessional attitude he encountered with the organizers. On his long drive home, Douglas resolved to turn his anger into action and began focusing on all the items that caused him frustration over the years as a pro-am racer, and then to channel that information to be used as lessons, what to do, what not to do, for his own regatta, the Black Dog Pro-Am.

With the help of close-knit family members and the resources of the family Black Dog Tavern business, Douglas single-handedly created a memorable event on his own windswept island of Martha’s Vineyard.

After enticing a few top mainland pros with a small purse of prize money , he set about attracting as many New England racers as possible. The whole Vineyard community got into the act, and even local retired sailor Nevin Sayre decided to compete again.

With the stage set for a good show, Douglas got the word out to the local press and radio stations that the event would offer people a chance to watch professional racing and learn to windsurf for the first time. For  twelve dollars, local non-windsurfers could get an event t-shirt and a windsurfing lesson.

When racing finally commenced, racers were greeted with 20 to 30 knots of windy offshore conditions, resulting in spectacular high-speed racing at the beach’s edge. The event came off just as  planned. Hundreds of spectators came,  and over fifty signed up to try windsurfing for the first time. In a tactically inspiring move, Douglas had the pros stop racing for a few hours to help teach lessons in the protection of the shallow lagoon just behind the race site.

Douglas’s frustration, determination and vision proves that a single person can make a difference for the sport and there is clear evidence which suggests that this bug is catching on.

There’s something about races lately that’s inspiring people to try the sport for the first time. This year’s Aruba Hi-Winds Pro-Am and Windsurfing Festival attracted people from around the world to windy Aruba. Once there, they experienced a windsurfing festival, and many of them tried windsurfing for the first time. Of course, it may have helped that a convention for travel agents was going on at the same time, and it didn’t hurt to have an indomitable spirit in the form of Matt Schweitzer, known for his unmatched freestyle ability, show up to entertain the crowds.

Since our landmark interview with the first son of windsurfing, Schweitzer is embarking on his comeback into the limelight of the sport. Although Schweitzer absolutely rips on a wave board, his  main focus is stoking people on the possibilities of long board fun.  Freestyle was the main means of entertainment, as a continuos stream of kids, amateurs and pros stood in line for a quick spin into yesteryear. His old plastic stock windsurfer was so popular that Matt was heard mumbling that he wasn’t able to sail enough and should have brought a whole fleet! It seems that there are more closet longboard and freestyle sailors than imagined. (We won’t mention any names). Matt’s board never hit the beach, as sailors literally lined up for a spin on the old classic.

Local Aruban children were treated to world class freestyle “fun” with Matt, wife Shawneen, and Mike Gebhardt giving personalized instruction and rides. Suddenly, in the serious context of racing, windsurfing was fun, exuberant  and attainable in the eyes of the beach audience.

More than a few top pros were heard commenting about the level and number of talented junior racers coming up through the ranks in the amateur division of the Hi-Winds. The South Americans were in full force and looking to take over the world as the new superpower on the water, and the sport is really taking off south of the border. The future world champion may well have been racing on the beautiful aqua waters of the famed Fisherman’s Huts.

The festival ended with the  popular Hawaiian Tropic Bikini Contest. The competition was hot as many of the sailors were invited to ‘lather up’ the bronzed bikini-clad beauties. Competition was intense and hard fought, as the grand prize was a round trip ticket from title sponsor American Airlines to anywhere in the world. The finalists were reduced to two; a local Aruban beauty, and the girlfriend of one of the pros. It was too close to call, so after tedious deliberation and much gamesmanship (on the part of the girls; we won’t elaborate), a tie was declared and both girls were awarded round trip tickets.

The racing on the Pros side of the event was close and intense with an abundance of talent on hand, tuning up for the rest of the Pro tour events. American Micah Buzianis of Maui narrowly edged out the ever competitive Phil McGain to keep his streak of victories on a roll. It was heard that Buzianis went on to totally dominate the next stop of the caribbean PWA Tour in the wavy venue of Cabarete, Dominican Republic. Dunkerbeck may have his hands full with taking on the boatspeed of the finely  tuned Buzianis.