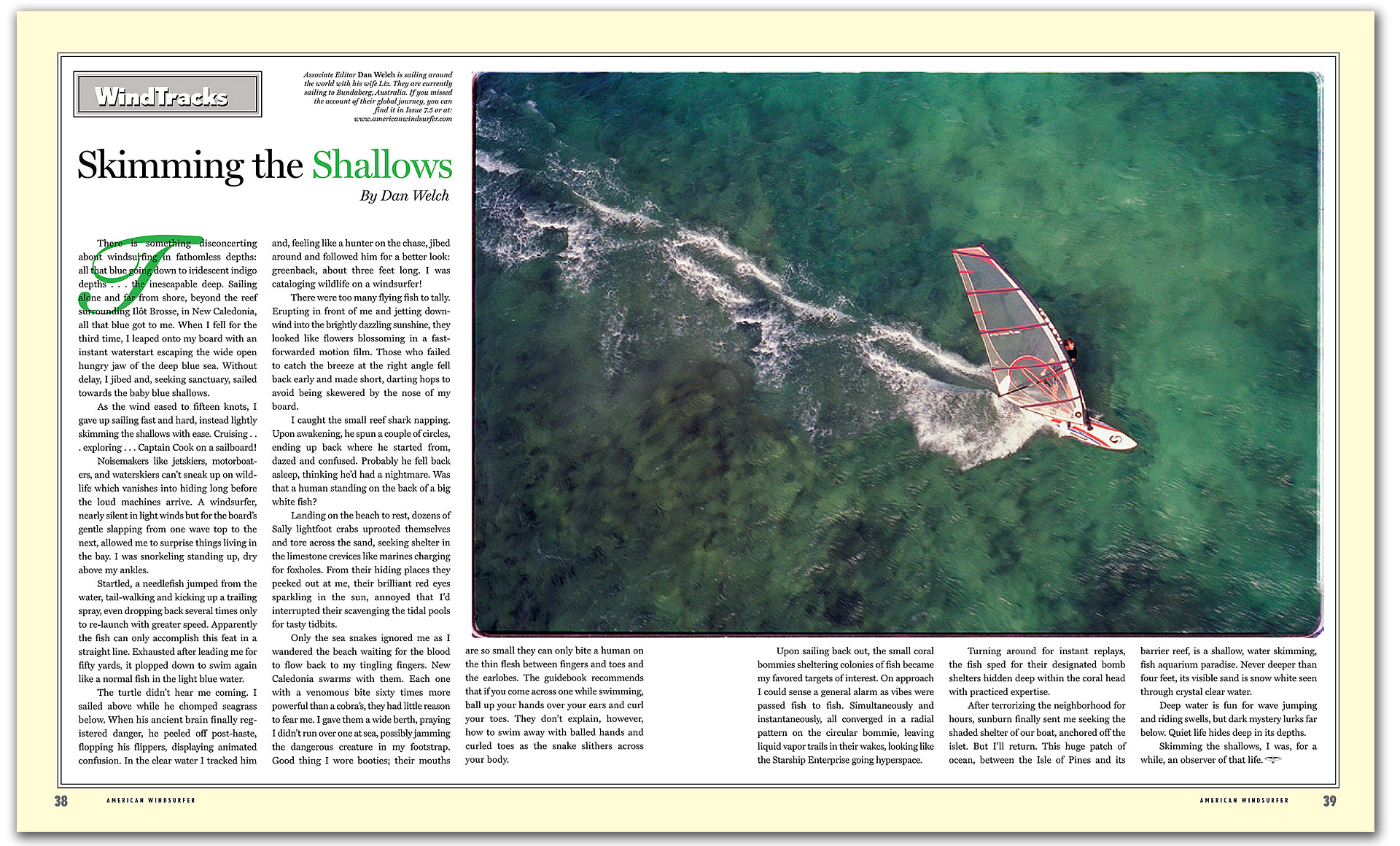 THERE IS SOMETHING DISCONCERTING about windsurfing in fathomless depths:  all that blue going down to iridescent indigo depths . . . the inescapable deep. Sailing alone and far from shore, beyond the reef surrounding Ilôt Brosse, in New Caledonia, all that blue got to me. When I fell for the third time, I leaped onto my board with an instant waterstart escaping the wide open hungry jaw of the deep blue sea. Without delay, I jibed and, seeking sanctuary, sailed towards the baby blue shallows.

As the wind eased to fifteen knots, I gave up sailing fast and hard, instead lightly skimming the shallows with ease. Cruising . . . exploring . . . Captain Cook on a sailboard!

Noisemakers like jetskiers, motorboaters, and waterskiers can’t sneak up on wildlife which vanishes into hiding long before the loud machines arrive. A windsurfer, nearly silent in light winds but for the board’s gentle slapping from one wave top to the next, allowed me to surprise things living in the bay. I was snorkeling standing up, dry above my ankles.

Startled, a needlefish jumped from the water, tail-walking and kicking up a trailing spray, even dropping back several times only to re-launch with greater speed. Apparently the fish can only accomplish this feat in a straight line. Exhausted after leading me for fifty yards, it plopped down to swim again like a normal fish in the light blue water.

The turtle didn’t hear me coming. I sailed above while he chomped seagrass below. When his ancient brain finally registered danger, he peeled off post-haste, flopping his flippers, displaying animated confusion. In the clear water I tracked him and, feeling like a hunter on the chase, jibed around and followed him for a better look:  greenback, about three feet long. I was cataloging wildlife on a windsurfer!

There were too many flying fish to tally. Erupting in front of me and jetting downwind into the brightly dazzling sunshine, they looked like flowers blossoming in a fast-forwarded motion film. Those who failed to catch the breeze at the right angle fell back early and made short, darting hops to avoid being skewered by the nose of my board.

I caught the small reef shark napping. Upon awakening, he spun a couple of circles, ending up back where he started from, dazed and confused. Probably he fell back asleep, thinking he’d had a nightmare. Was that a human standing on the back of a big white fish?

Landing on the beach to rest, dozens of Sally lightfoot crabs uprooted themselves and tore across the sand, seeking shelter in the limestone crevices like marines charging for foxholes. From their hiding places they peeked out at me, their brilliant red eyes sparkling in the sun, annoyed that I’d interrupted their scavenging the tidal pools for tasty tidbits.

Only the sea snakes ignored me as I wandered the beach waiting for the blood to flow back to my tingling fingers. New Caledonia swarms with them. Each one with a venomous bite sixty times more powerful than a cobra’s, they had little reason to fear me. I gave them a wide berth, praying I didn’t run over one at sea, possibly jamming the dangerous creature in my footstrap. Good thing I wore booties; their mouths are so small they can only bite a human on the thin flesh between fingers and toes and the earlobes. The guidebook recommends that if you come across one while swimming, ball up your hands over your ears and curl your toes. They don’t explain, however, how to swim away with balled hands and curled toes as the snake slithers across your body.

Upon sailing back out, the small coral bommies sheltering colonies of fish became my favored targets of interest. On approach I could sense a general alarm as vibes were passed fish to fish. Simultaneously and instantaneously, all converged in a radial pattern on the circular bommie, leaving liquid vapor trails in their wakes, looking like the Starship Enterprise going hyperspace.

Turning around for instant replays, the fish sped for their designated bomb shelters hidden deep within the coral head with practiced expertise.

After terrorizing the neighborhood for hours, sunburn finally sent me seeking the shaded shelter of our boat, anchored off the islet. But I’ll return. This huge patch of ocean, between the Isle of Pines and its barrier reef, is a shallow, water skimming, fish aquarium paradise. Never deeper than four feet, its visible sand is snow white seen through crystal clear water.

Deep water is fun for wave jumping and riding swells, but dark mystery lurks far below. Quiet life hides deep in its depths.

Skimming the shallows, I was, for a while, an observer of that life.